Jacqueline Cuddey, is a 34 year-old mother of 4 who is suffering from a rare auto immune condition called Neuro-Behcets Disease which attacks her entire body, and affects her brain. Jackie has been hospitalized since September. She attempted to come home to her children (ages 10, 7 and 3-year-old twins) on two occasions. In both instances, she was transferred right back to the hospital via emergency ambulance. She was last sent to the hospital on October 16th, where she remains today. Since then, she has endured severe swelling throughout her body, blood clots in her lungs, and last week they discovered subdural hematoma in her brain, as well as internal bleeding in her brain. They are unable to do surgery because it is too risky with her other ongoing health problems. Her liver is also declining, due to the amount of medications she must take. She is unable to eat and had a temporary feeding tube, Now, her overall health has gotten so much worse, they are unable to put her out for the procedure to put in the permanent feeding tube so as of now she has no nutrition going in to her body. 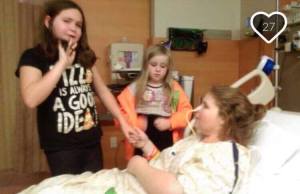